Portuguese Presidency: CIP in a webinar about EU Trade Policy 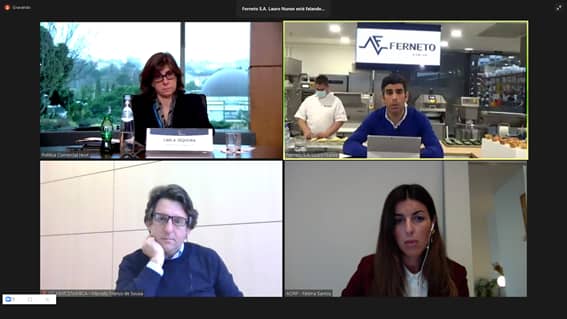 On the 10th of February, CIP’s Secretary-General, Carla Sequeira, moderated a panel composed of national companies’ representatives, in an EU Trade Policy Webinar, organized by the Directorate-General for Economic Activities (DGAE), in the context of the Portuguese Presidency of the Council of the European Union.

The event, in a virtual format, also counted with the participation, among others, of the Secretary of State for Internationalization, Eurico Brilhante Dias, the Deputy Director-General – Chief Trade Enforcement Officer of the Directorate-General TRADE, Dennis Redonnet, the Portuguese member of the Commercial Policy Committee, Maria João Botelho, and the Secretary of State for Trade, Services and Consumer Protection, João Torres, whose speeches had as their central theme the process of the EU trade policy review, currently underway in the context of the Portuguese Presidency of the EU. Moreover, European Commission representatives presented the themes of Trade Defense Instruments and the Access2Markets platform.

In her speech, the CIP Secretary-General defended an ambitious agenda to drive international free trade, fighting protectionism. Also, the effective implementation of existing trade agreements and ratification of agreements that have been concluded such as the one with Mercosur whose significant importance for European companies is revealed in strategic, economic, and sustainability terms.

Furthermore, she mentioned the need to ensure an adequate review of the Generalized System of Preferences, and in favour of a global Europe, the need for increased focus in trade and investment policies with the EU’s most important partners – USA, China, and United Kingdom – and economic blocs with significant potential – Mercosur, Africa, and India.

Finally, a strong appeal was stated by the representatives of the companies – MATCERAMICA, FERNETO, and the Jewellery and Watch industry Association – for greater efforts by national and EU authorities to ensure a level playing field for companies operating in the EU Single Market and exporting from it. On this appeal, backed by CIP in its final intervention, concrete examples were given – unjustified differences in administrative procedures across the EU Member States and the lack of supervision at the EU’s external borders, results in the entry of foreign products that do not meet European standards.

There are currently no events.
Share this ArticleLike this article? Email it to a friend!
Email sent!